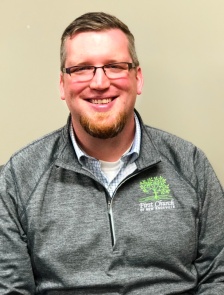 Pastor Joel began serving as senior pastor of First Church in July 2016. He previously worked as the youth pastor and associate pastor at the United Church of Huntington in Wellington, Ohio from 2009-2016. He has a passion for studying and teaching God’s Word, and seeing people incorporate their faith into their everyday lives.

Joel is originally from Western New York. He attended Anderson University in Anderson, Indiana and Ashland Theological Seminary in Ashland, Ohio. He earned his bachelor’s degree in Bible & Religion and Mathematics, and his Master of Divinity with a concentration in the Old Testament.

Joel is married to his beautiful wife Alie. She is a special education teacher in Celina City Schools. Together they have one daughter named Josephine, who just turned two in 2016. In his spare time, Joel loves to spend time with his family, read, and follow sports.

“Seek first his kingdom and his righteousness, and all these things will be given to you as well.” – Matthew 6:33

Tory began working at First Church in July of 2015. She graduated from North Park University in Chicago with a double major in Youth Ministry & Biblical and Theological Studies. At North Park, Tory interned at three different churches through out her four years before signing on to be the Director of Children & Youth at First Church after graduation. She has a passion for the Lord and for children and youth. She loves helping children and students know and grow in their relationship with Christ. In October 2017 Tory married Jake Breitigan. In her free time Tory likes to cook, read, spend time with friends, and spend time in Michigan with her family on the lake.

Connie Schroer joined the staff at First Church in early 2006.  She is married to Allen Schroer and they are parents to Zane who will be a senior in high school next year.  She is the Office Manager & Treasurer and is responsible for all aspects of the office and finances of the church.  Connie is in the office from 8am to 3pm M-Th. 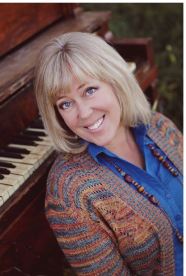 Sharon began serving First Church in 2013 as accompanist for the choir, bell choir and vocalists in the music program.  She is also a full time piano instructor and accompanist for many local schools and musical organizations.  She is married to Robert and they are parents to Rob, Erica, Ben and Caitlin.  They have 4 grandchildren and one on the way!

Greg & Lori joined First Church as staff members in 2016. They took over the job of daily care, cleaning and maintenance of the church and ministry center buildings.  They also set up for events and make sure those who use the facilities have a great experience.   Both also serve the church in volunteer roles.  Greg helps run the sound system on Sunday mornings and Lori prepares amazing meals for our Wonderful Wednesday program each year during Lent.

Listen to the Sunday Sermon

Reflections on the Bible, life, and the church from Joel Bucklin